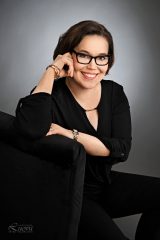 The old saying ‘The apple never falls far from the tree’ applies to Anna Kaleva-Tsagklas; she was born into a long line of photographers in the family. According to her own words, the ball was narrowly dodged and she did not become a photographer, but a professional in the photography in the industry. In her native Finland, she works as the CEO of both the Finnish Professional Photographers Association and the Union of Finnish Photo Traders. The CEO position as well as a Board seat in Finnfoto – The Central Association of Finnish Photographic Organization gives her a front row seat into the whole industry in Finland.

Besides working domestically in the photography industry, Anna Kaleva-Tsagklas also has an international career. Since 2017, she has worked as the CEO of the Federation of European Professional Photographers. This was preceded with several years as Board member in the FEP. If being a CEO in Finland gives one a front row seat to Finnish photography, being the CEO of FEP gives a unique overview of the whole Europe, after all the FEP member countries cover the whole continent from the Atlantic to the Ural Mountains.

Anna Kaleva-Tsagklas has a Master’s degree in Social Sciences and a Further Qualification in Financial Management, she also speaks several languages.