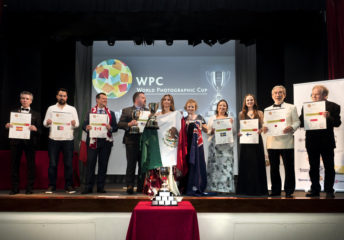 Mexico and the USA got the same number of points in the contest and were both declared winners of the WPC 2022!

This is the extraordinary result of the competition, now in its ninth edition this year, held for the first time in Italy.

Mexico and the USA led the way from the other teams, dominating the WPC, each with two gold medals, one silver and several finalists in all six categories of the competition. Third was the Australian team (twice WPC winner and defending champion), followed by Spain, Portugal, Sweden, Canada, Finland, Japan and Poland in the ranking.

All the results, including the “Best of Nations” awards and down to the tenth place in each category, soon visible on this website, as well as all the photos taken by the official photographers of the event.

After two years of online awards due to the pandemic, the awards ceremony took place in Rome, at the prestigious headquarters of the Centro Congressi Roma Eventi Piazza di Spagna.  An audience of over 200 photographers, representing 26 national teams from 4 continents, attended the celebrations.

The WPC  awards opened by the amazing Fanfare of the Bersaglieri, it then followed the celebration of all the winners of the past 2020 editions and 2021, previously presented online,  and in particular receiving officially the prestigious cup were Team Brazil for 2020 and Team Australia for 2021.

All individual winners, the “Best of Nation” and the top 10 teams of the last three editions presented with their images and awards.  The 2022 medal winning images, thanks to the WPC Gold Sponsor ChromaLuxe, will be visible for 3 weeks at the Studio Orizzonte Gallery in Rome. Thanks to the courtesy of Kivo3D, a splendid 3-d version exhibition of the winning images is also on display on the WPC website

“There is not in the world a program with photography like this”, said Giuseppe Scozzi, WPC Chief Executive, “where teams representing nations commit resources and their best talents to win the cup, but  always in a spirit of friendship and unity on a global level. The raising success of the WPC – added Giuseppe Scozzi – is the demonstration of how important the contribution that communication operators make to mutual knowledge between the various countries is …and, an Italian and a Roman, also, how much the city of Rome is the perfect setting for hosting international events, cultural and social like ours.

The WPC CEO also thanked the local organising group (WPC Italia), for having organized such a beautiful event. He finally thanked, the WPC gold sponsor CHROMALUXE and the local event sponsor GRAPHISTUDIO, NIKON and FOWA for their support to the project and to the professional photographers around the globe.

The pictures of the event in Rome are published HERE